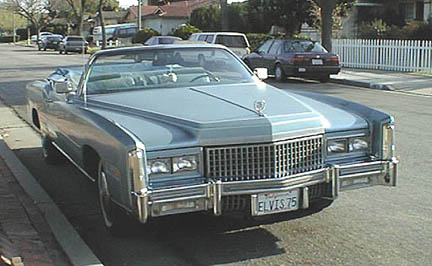 For years I joked with my friends that I didn't want a Jaguar or a Lexus or a Porsche or a Mercedes.  No, sir.  I wanted a seventies-era Cadillac Eldorado convertible.  A machine of superlatives, from a time when gas costs less than $1 a gallon.

My dad had borrowed one from a friend one month in the summer of 1977 and our family had a blast in it.  The machine commanded attention, and it was a great car to ride in.

I had reiterated my desire for one in late February 2002, and everyone (including me) was sure I was joking.

The fates dropped a car into my lap which was very near to what I had been demanding.  At a GREAT price.  Though I did not know it at the time, the 1975 Cadillac Eldorado was the exact model we had that fatueful summer.  I had originally thought that the car we had was the older 1973-74 model with the round headlights and wheel skirts.  In my humble opinion, the 1975 is actually a better looking car. Revisiting the photos showed that the 1975 is indeed what we had.

I didn't have $3500 to blow on a car.  Or $600/yr more insurance.  I didn't need a gas bill that would make OPEC drool.  Or any car that 'needed attention.'  I hardly have time to sleep and eat.  No sir.  I could not justify owning such a car for any reason.

But I made the mistake of mentioning it to my friends who assured me that the fates were speaking to me and not to ignore them.  I called other friends to try to get talked out of it.  I even called my hyper-practical mom who thought it would be a good idea (!) to get it.  And it turns out it was offered on the day of the anniversary of my dad's death.  "Dad wants you to get the car" mom said.

Arguments for buying the car:

1) If my wife kicks me out, I can live in it.
2) Can decalre it a sovereign nation to avoid traffic tickets.
3) Can install phones in different area codes in the two ends of the car.
4) Will win with nearly anything that tangles with it in an accident.
5) Can harass my older brother to send me all of his old 8 tracks (hi, Mike!)

So after an uneasy conversation with my wife, she green lights me on the car.  But I'm still not sure.  I look at the car.  It needs help.  Another offer is on the table in Denver for $4000.  A decision needs to be made.  The prospect of driving legendary Detroit steel from a production run of only 8900 finally pushes me over the top.  I write the check.  I take the keys.  I start the process to make it mine.

The car has a lot of cosmetic problems.  But it runs well now and the top mostly works.  Lots of rust on the surface (a fine patina), and some rechrome or replacement may be in order.  My next $1000 is targeted at top and window related repair, and the $400 on the equivalent of CV joints in the front (clicking noise when steering).  I have a small oil leak (surprise?). The seat leather is shot.  The door panels are a mess, one speaker is broken, the 8-track needs to be aligned, and the carpets need to be replaced.  The steering wheel is cracked, the control stalks rusted, and the key buzzer buzzes even with the key removed unless I thwack the tumbler.

The clock stops when the inside lights are on.  The door light switches on the driver side are fussy.  The fiber optic light monitors are dim on the driver side, and completely missing in the back.  I need new rear speakers (they need to be 10 ohm!?!?).  Could probably stand a paint job.  Need the rear trunk bezels (aftermaket ABS).  Air conditioning compressor may be shot.  Air damper stuck on full heat.  One visor needs to be resewn.  Needs a really good cleaning.  I need lots of twiddles and twaddles, and want to take it out to some meet full of caddy enthusiasts who would suggest the things that I might need, and in what order I'd need them.

So, it is a driver.  People are living out their wishes to buy a fully impractical car through my indiscretion.  It is a car of extremes.  Largest engine in a passenger car.  5200 lbs.  19.5 feet long (JUST fits in my garage!)  Steers like a battleship, accelerates like a Honda Civic. Has a horn that sounds like a real horn (3 tones!).  Styles my receding hairline very nicely at 80 mph (don't tell the CHP).

I'm enjoying it, have almost 1000 miles in it already (as of April 2002).  Kids (3 and 5) love it because it is so weird and big.  Had to get special 'lap belt only' booster seats to comply with California law (Britax Laptop)

The mechanics working on this car are Ron at Almaden Chevron (Ron is an old GM guy) and Harold Upholstery in Mountain View who is recognized as the regional expert on the notorious 'scissor top' convertible mechanism.

My two options are to do minimal work and just DRIVE it.  Dump it in a year or two to someone who has the money to restore her right.  Or hold onto it and sink a fortune into it.  That makes it harder to drive.  8-)

A museum in Las Vegas once sold a 1976 Eldorado convertible with *29* original miles for $45,000.  So I guess that should be my upper spending limit.

Update 5/2002:  A group of 3 Eldorado owners from the local Cadillac mailing list (SFBAYCML) have got together to buy a junked 1975 Eldorado convertible as an organ donor.  The work continues!

If you are the owner of one of these magnificent machines, I invite you to peruse my survival guide.  In it, you will find my advice from all of the grunt repairs I have had to do on this car (like fixing the complaints in the preceeding essay!), and shared advice from mailing lists and fellow owners.  If you are thinking of buying one, make sure you know the Stork Rules For Buying A Vintage Cadillac. Ironically, though the car is named "ELVIS75", Elvis himself never owned a 1975 cadillac. He did own a 1974 and a 1976.

Thanks to the factory radio, I also have become well acquainted with 8 track tape technology, but that is another story.

Update 5/2003:  I am nearly $10,000 into my $3,500 car.  Items repalced include full front brake system,  new FR721 tires (nice!), drivesharts, and soon the whole front suspension (upper and lower control arms, pittman arm, and idler arm).  Interior is still a mess and the scissortop is fritzy.  My A/C compressor seized and the condensor leaks.  I feel like I can write a country and western song.  But I still like the car.  Call me a masochist.  We also stripped the parts car clean and have a stash of spare parts.  Write if you want to buy anything!

Update 6/2004: I have crossed the 10,000 mark with $4300 in front end work.  A number of oil leaks had rotted out a lot of the suspension parts, so about $1000 was spent to plug up the leaking transmission and valve cover gaskets.  The leaky and flaky power steering system was fully replaced.  Upper and lower control arm bushing.  Cracked (!) wheel hub.  Worn ball joints. Torn CV boots.  Maladjusted sway bar.  Speedo cable.  Shocks.  Rear brakes.  Steering damper.  Work was done by the now defunct Reinegger Frame and Wheel who specialize in big old GM suspensions, but more typically in the motorhome variant.  Way more than the original $1600 estimate, but WOW.  The car tracks dead straight and is solid as a rock even at 80.

I also replaced the rear fillers with ABS ones from the new defunct North Yale Auto Parts. Though I was slightly disappointed with the fit, I made them work.  I painted them with Duplicolor GM 253 which is a fairly close substitute for the factory color (Gossamer Blue Firemist).  Except where my inadequate spray painting skills caused runs, it looks pretty good.

Update 9/2008:  After several abortive attempts to sell the car, I decided I ought to replace the torn up interior to increadse my chances of selling and to increase my enjoyment while I still had the car.  You can read that story here.  I just noticed today that I have put just over 16,000 miles on the car.  Wow.